In the Enlightenment of the 17th and 18th centuries, logic, reason and freedom of thought overcame the tyranny of canon and superstition. Now the light of reason, freedom, and responsibility has faded across the Western world as new elites have arisen under cover of Covid. What was already simmering and growing for decades has now emerged into the open: joyless authoritarian rule at the behest of a small band of superrich, using methods that shun reason and embrace the darkness of superstition. The ruling neo-feudal elites that dominate the internet, are squeezing the middle classes with taxes they themselves avoid, and produce narratives as needed to justify their elevated position while applying divide-and-rule tactics to control the majority.

These elites will not relinquish their position, irrespective of how many times they pivot and warp the Covid narratives. Elites in power never let go of the reins voluntarily, and certainly not after committing the egregious crimes they have just perpetrated. They are all-in now, and they will do whatever is needed to remain in power and avoid justice, making the next few years inevitably a long slog for most Western countries. Censorship will continue. Divide-and-rule will continue. Inalienable rights will not be returned. There will simply be new excuses and a further erosion of democratic practices.

This then is the ‘new normal:’ it’s not about whether you mask up, take your booster or stay a certain distance from your fellow humans. It’s about submitting to the dictates of powerful elites that have contempt for their own followers.

The important question today is not how it came about, but what we can do to help the light of the Enlightenment burn again. How does a relatively poor, censored, defensive minority fight against the might of the world’s governments, media, money, and large international institutions? To answer this, we first sketch the strengths of the re-Enlightenment movement, and then outline how we can advance our cause by exploiting those advantages.

We have three huge strengths on our side. First, our story is positive and joyful. Second, populations that embrace the spirit of the Enlightenment are stronger and more productive than those who spurn it. Third, unlike the majority that is deliberately kept divided, we are able to unite on a common identity and cause.

These are formidable advantages that have historically been sufficient to win out over superior force. Historically, the authoritarian rule of kings and autocrats (whether fascist or communist) has eventually yielded to more joyful and free ways of life, simply because those ways work better and are more compatible with human nature.

For this reason alone, we genuinely think that we are going to win. Hopefully that victory will not take the 70 years it took for Communism to collapse, or the roughly 20 years it took for fascism to run itself into the ground, but our victory will surely take years. We foresee that our cause, for some time yet, will be a minority cause carried by a few countries (like those in Scandinavia) and elsewhere growing in the margins. We think it will take about 5 years for the re-Enlightenment movement to become a recognized large force throughout the West, and more like 10 years for it to become dominant.

The broad strategy must be to build new communities that produce fun, education, health, science, art, and commerce, while standing separate from the majority mainstream channels controlled by the elites. To be cohesive and retain an identity true to its cause, the re-Enlightenment must articulate a clear enemy and a clear broad purpose. The purpose we propose is to thrive as individuals and communities, which is exemplified by celebrating fun, reason, and freedom.

Our enemy, as it was in the Middle Ages, is superstition and tyranny. By having a clear enemy and being true in our opposition to that enemy, our communities should be able to attract others and to force the enemy onto the defensive, and from there into oblivion, with the population it controlled eventually absorbed into our new society. It is this essential vision that propels our arguments in The Great Covid Panic.

Yet how do we achieve this, from a practical standpoint, starting today? We propose five interdependent labors.

1.       Set up local groups to provide whatever is not provided by the existing neo-feudal structures. This will include new scientific institutions, new schools (or at least additional teaching alongside present schools), additional health structures, and groups oriented around art and fun (e.g., sports, dating, worship, song, dance, crafts, and travel). We would want to see re-Enlightenment universities offering degrees. We would like to see re-Enlightenment daycare, reading groups, walking associations, dance clubs, and so on. With sufficient coordination and set-up, it should be possible soon to locally live in an Enlightened manner, meeting regularly with like-minded people and having fun with them. We do not think of this as a highly ideological, cult-like endeavor, but more as the natural consequence of the fact that it is much more fun and productive to team up with other re-Enlightened people than to continue to partner with the miserable and brainwashed. Simply by rejecting the darkness, these communities will already be highly distinctive and appealing.

2.       Set up larger institutions at the national level and international levels to embody the effort and form a focal point for reform ideas, new media, political activities, demonstrations, and so on. There are many things that can only be done by fairly large groups, such as figuring out how to set up media channels that are more impervious to manipulation by elites, or providing the infrastructure for organizing things like citizen juries.

3.       Declare who is the (local) enemy and accept the consequences of that declaration. National re-Enlightenment groups could bring out lists of companies, institutions, and practices deemed neo-feudal and to be rejected. Big Tech, Big Pharma, Big Media, the Lancet, the BMJ, many other “scientific” journals, the Gates Foundation, and many universities should be on these lists. The lists should be drawn up carefully so as to include the most obvious enemies, but to leave out those who are somewhat on the fence and might swing our way. The elites will continue hiring digital thugs to bully or cancel individuals who threaten their control, and these lists of offending groups – not individuals – would be our answer to that blackballing: a device for making the enemy visible to anyone who wishes to aid the re-Enlightenment movement, by separating the core enemy from the vast majority. Local branches of the re-Enlightenment could have their own lists and their own participative methods for coming up with candidates to add. Members of the re-Enlightenment would commit to using the listed companies and institutions as little as possible, in favor of institutions that sign up to local re-Enlightenment declarations. In this way, the consumer power of the movement would be mobilized. Outsiders would begin to have a pragmatic reason to join us, while insiders would be offered a clear way to help. These lists would also help to verify the commitment of politicians who give lip service to the re-Enlightenment, as real support would mean foregoing sponsorship from the listed enemies. Those citizens unwilling to openly support the re-Enlightenment could still do so covertly, by boycotting the listed companies and supporting those that have signed up to re-Enlightenment principles. Entrepreneurs could set up new companies explicitly targeting the growing re-Enlightenment market.

4.       Offer a redemption path for institutions and companies that want to embrace the light. Redemption would come subject to the general principle of actively becoming a force for good. This would include paying a reasonable amount of taxes, divulging the corruptions of the past, and severing all ties with remaining listed companies. It could include spinning off parts of itself into smaller entities (in the case of Big Tech). In the case of universities, we think it should include abolishing all “ethics committees,” whose current role is purely authoritarian and unethical; committing to a maximum salary for its management, such as equal to that of a senior government minister; and the adoption of a mechanism for democratic appointments to university leadership positions, such as via citizen juries. The general principle is that the to-do list for redemption should flow logically from our aims, but should also feel radical and painful to the enemy, and initially dismissed out of hand by the neo-feudal institutions. That wedge helps define ourselves and our goals.

5.       Adopt a preliminary local reform plan for government and politics. The re-Enlightenment movement is a natural home for those reimagining how government and politics should work in the future. It is a matter of trial and error to see what really does work in particular cultures and countries. It is time for citizens once again to experiment with different models of governments, working out what fits the modern era. By adopting a preliminary local reform plan, alongside a mechanism for changing tack if new information comes along, the movement can set itself up as a movement not only for alternative production but for constructive reform, forcing members to take seriously their role as co-owners of their country.

These five labors form a single whole, with each on its own making little sense. Lists of enemy corporations make no sense if there are no alternatives. Local groups cannot survive and thrive without some national network via which people who move around can find local groups. National networks cannot survive without local ones, nor without a clear identity that appeals to citizens trying to find a way out of the darkness. Redemption paths need examples for what is meant by a “good re-Enlightenment institution”.

The five labors offer a way to capture the agenda and establish key symbols of our identity. Together, they can produce the force needed to generate a parallel society with a productive role on its own, but also a winning reformed society that will eventually attract most of the presently shackled majority, thereby delivering true reconciliation after this time of darkness. 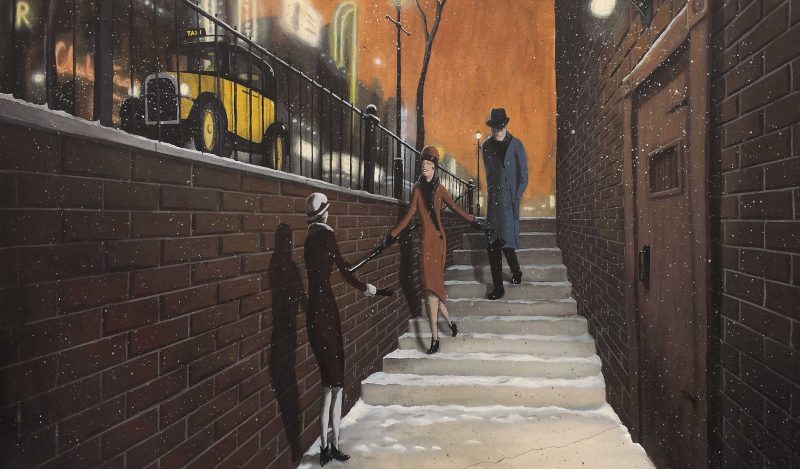